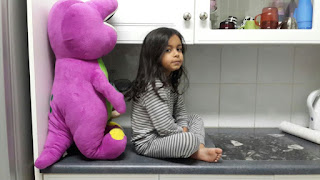 So fast. And I really miss this baby and toddler Mahati. These days whenever she sleeps, I can’t help but sit beside her with emotions so strong that they are threatening to burst out of my eyes.
This nostalgic feeling of the peacefully sleeping daughter but at the same time , how much she has grown. She is not a baby or a toddler anymore and I really miss that phase of hers. That phase in my daughter’s life is gone forever and will never come back.

Why are we parents in such a hurry for the children to grow up ? These phases in her life are never going to come back. And just looking back the pictures and videos is just not enough.
Why couldn’t I just slow down a bit when she was small and enjoy things in a much more relaxed way? Why was I always in a hurry to get things done and get through the day ?
May be I could persuade the days to be a bit longer and the nights to be a bit shorter…………….. just may be !!!

She is a girl now , not a baby girl any more.

So I enjoy the feeling of co-sleeping much more, without any guilt now-a-days because no matter how much you try , your baby will still grow up and get her own room and sleep separately.
So I enjoy and look forward for her to come back from school and chat , because no matter how much I try , she is definitely going to grow up , study and leave the house for higher studies or for a job.
And I am reminding myself that there are only so many more days that she is going to ask for my help and my opinion , because there will definitely come that day when she doesn’t need them anymore.
Damn , there will come that one day when she will not need me any more……… 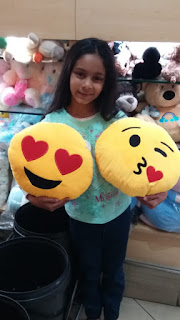 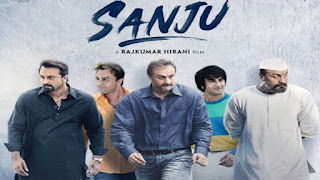 In the entire film , I only saw Sanjay Dutt and never once did I remember that Ranbir Kapoor was the one portraying it. I guess this is the biggest compliment that an actor can ever get. That the audience get involved into the character that is being portrayed so much that they forget the one portraying it. I cannot say anything further. Ranbir Kapoor is GOD. Period !

Raj Kumar Hirani's films are filled with emotions and there is never a dull moment. And this is what I like the most. This film definitely doesn't disappoint from an "entertainment" point of view and from a "human values" point if view. The relationship between the father and son is something that every parent must watch and learn. Because no parent is perfect and no child is perfect. It is ugly and messy , yet so fulfilling and satisfying. Parents have so many expectations from their children that it is but natural that children bear the brunt of it. And we cannot blame the parents because all they want, is to see their child succeed. I guess being the child of a successful father is so difficult. The weight of the expectations pulls you down so much and all you want is a normal childhood and to be a normal child.

There are so many such moments in the film which make you think hard and move you to the core.

Friendship is another aspect that is shown so beautifully.The character of Kamli was so refreshing to watch.His concern for the friend , his non-judgmental attitude and above all his selfless love for the other person just melts your heart away.We all need that one friend in our life who will never judge and who will never leave your side no matter what. No matter what life throws at you , it is friendship that makes it all bearable and do-able.

There are life lessons which are the biggest take-away from the film.
A parent who does anything and everything for the son. A son who always looks out for the image of the father. A friend who is indeed a friend in need. It is such a normal movie but still special in so many ways.

Having said that, I have to re-iterate that I definitely don't know what Sanjay Dutt did or did not do in his real-life or whether he deserves this benefit of doubt etc.

Go watch the movie for Ranbir Kapoor and Raj Kumar Hirani.
Posted by Purna Koumudi Vogeti at 11:22 PM No comments:

My Cooking Blog - Dont forget to check it out